But no worries since Sharia is superior to Western jurisprudence.


"The kind of man who wants the government to adopt and enforce his ideas is always the kind of man whose ideas are idiotic."
- H. L. Mencken on ludicrous ideas such as getting the state to enforce a book you believe is "holy". 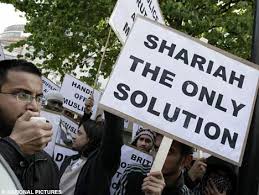 A new study conducted by an American University in Canada has a lot of bad news in it. The news release has some rather shocking facts premised on the study, none more so than, 'The institute could not find funding for the study in Canada.' Multi-cult political correctness run amok. It is hardly a surprise that a supine population, deadened by 50 years of cultural Marxism, would not allow institutions of 'higher learning' to conduct factual surveys of what Moslems in Canada might truly believe. The results would of course be too unsettling for the water-carriers of the multi-cult, Islam-is-Peace cult. The following are the key aspects of the study of 465 Moslems living in Canada's capital Ottawa;

Maybe Moslems in their grandiose condescending superiority can explain to us hoi-polloi Infidel mass just what the results of this survey really mean?

A newly released survey suggests a large number of Muslims living in Canada will not disown Al-Qaida.

The study, conducted by the MacDonald Laurier Institute, found 65% of Muslims questioned said they would “repudiate absolutely” the terrorist organization, while 35% would not do so.

“From a security perspective, it is difficult to know if a 65% rate of repudiation (of Al-Qaida) is re-assuring or a 35% failure to repudiate troubling,” wrote study authors Christian Leuprecht, associate professor of the Royal Military College of Canada and Conrad Winn, Carleton University professor and president of COMPAS, a public opinion research firm.

“The most radical political views tended to be expressed by relatively secular people, often equipped with higher education in the social sciences, while devout Muslims were sometimes the most articulate advocates for Canada and democracy.” According to the Ottawa based think tank, only a small minority of Muslim newcomers to Canada reject Hamas, Hezbollah, or the Iranian regime.

The survey, which was released Tuesday, found 62% wanted some form of Shariah law in Canada, 15% of them saying it should be mandatory for all Muslims.

The report also states support for extremism is just as high among Muslims born in Canada, or other Western countries, as it is among those hailing from oppressive dictatorships.

The survey involved phone interviews with 455 Muslims in Ottawa, between May and July 2008, with a margin of error of five percentage points. The study was funded by the University of Maryland for the National Consortium for the Study of Terrorism and Responses to Terrorism. The institute could not find funding for the study in Canada.