Islam is a cult

Akin to Nazism and Communism. 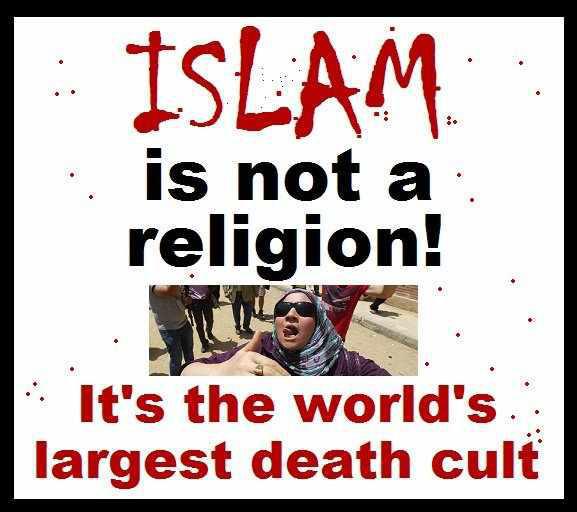 Religions are not cults and cults are most certainly not religions. This is not an abstract debating point. It leads right into the very heart of the modern debate over the political-economy and of culture itself. If Islam is redefined as a cult – which it most certainly is – then the entire discussion around its founder, theology, history, imperialism and modern day violence is entirely refocused, and re-oriented away from Politically-Correct Marxist-Fascist apologia and towards understanding and ultimately, proper action. If we view Islam for what it most certainly is, namely a cult from Mecca in which the ilah or 'Lord' was most certainly the moon deity and family idol of Muhammad named Hub'Al, through which Islam's founder merged both Judeo-Christian ideals with Arab paganism, than we move leagues closer to understanding the mores, ethos, and Bronze-Age nature of the Islamic cult.

The following are the attributes of any cult, as defined by any definition of what a cult constitutes:

-The replacement of reality and reason, with a vision of utopia, or socially engineered perfection, as guaranteed by following the cult's doctrines.

-The power of the cult is linked to a dialectical inevitability. The cult will succeed because history itself has been an unfolding of events leading to the supremacy of the cult in question.

-Cults are often universalist, and supremacist.

-The political is merged with the spiritual.

-Cult doctrines are enshrined in a written form that demands one only to follow what is written and prescribed. You can never debate what is written in the cult's handbook.

-Throughout the written and oral tradition, there is a ritualized devotion to the cult idols, myths and liturgies with no questioning or inquiry permitted.

-Homage and obeisance to the cult's founder or leader, no matter how deeply flawed, erratic, perverse, or criminal that person maybe actually be, is a necessity.

-The cult is parochial, not immanent in the application of its ethos. You must be kind to fellow-cult members, but vicious, uncaring, indifferent, violent or hateful of those outside the cult. Cult blessings are entirely derived by cult members.

-Many cults are ruthlessly exploitative of members and violently expansionist against non-members.

-Cults desire slaves and deny free-will. Only the cult, its idols, its leadership or its founder has free-will, to make decisions. Your main duty is to deny yourself free-will rationality and blindly follow the 'dialectical' path to glory.

-Cults are usually fatalistic. Since free-will is denied, cults resign themselves to fatalism around teleology, eschatology, and modern political-economies. Follow, obey and hope that the idol or cult leadership will take pity on you and reward you in this life or in an afterlife.

The above characteristics will inform most cults and they certainly do provide a description of Islam or the cult of Submission. Islam has much in common with both Nazism and Communism, since all 3 quite utterly and completely accept and implement the motivations which are the mainspring and animating features of cult power and its development. The individual in a cult is simply unimportant. They are consumed and subsumed by the cult and its ruling elite.

The base premise of why Islam is a cult is this and it cannot be denied by Moslemophiles, Western Marxist morons, or self-interested and obsessed Western elites:

A true religion has to free the mind, the body, the spirit and the individual. A religion demands that you use the God-given tools granted to you including your mind to achieve truth, beauty, perfection and understanding. A religion will not put you or another human into chains. A religion does not force you to memorize, repeat, prostrate yourself, or mumble phrases in a language you don't understand. A religion demands that your mind understand and accept the ethical program which is premised on the Golden Rule and Natural Law Rights. A religion's core must be centred around these two key ideals. They are the foundations for freeing the human.

It took Christianity a long and uneven period of time to come to the above. Rationalism was always present in Christian theology, along with Greek ideals of Platonic thought and Stoicism, along with Roman concepts of justice, grace and dignity. This is not to say that Christianity was wholly perfect or morally without fault in its history. That is absurd. Augustine for example rejected free-will, as did Luther and Calvin. This leads directly to a theocratic despotism. But over about a millennia through the works and philosophies of Grosseteste, Alcuin, Aquinas, Bacon, the Paris scholastics, and some aspects of the Protestant Reformation we can see the evolution of Christian faith into a theology which enshrines rationality, an immanent Golden Rule and Natural Law Rights. Christianity more than any other theology contains the central aspects of a religion. It frees people. That has always been its undeniable and quite exceptional essence.

None of the above applies to Islam.