Eye-Glasses, another Medieval invention based on math and science

Many people are lost without their glasses or spectacles. Failing eyesight is a natural condition of entropy, and human system degradation with time. Contrary to evolutionary dogma, systems don't 'get better' by magic and chance. They worsen and degrade. The scientific law of entropy makes this clear. As you age, your eyes must weaken and your sight will eventually fail. Imagine the loss of pleasure, productivity and clarity in all matters big and small; if eye-glasses did not exist ?

An excellent overview of the development of eye-glasses can be found in Glick's work, 'Medieval Science, Technology and Medicine', link is here.

There is no single inventor for spectacles, though they seem to have been in general usage before 1300. Sermons and extant literature from the late 13th and early 14th centuries do refer to an 'inventor' though no name is given. It seems logical to assume that between 1230 and 1250, 'eye discs' were discovered and used independent of an attaching mechanism. They were simply perched on the nose and they were formed from real glass which would have been rather thick in its cut. 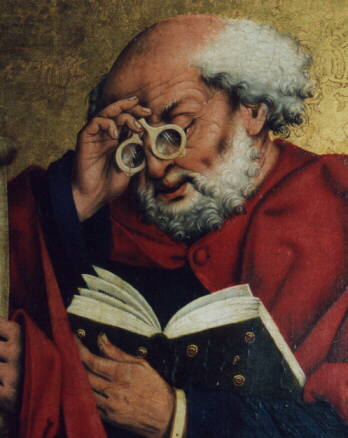 It would take about 50 years or so, to come up with sensible frames and insert the discs into open holders on either side of the nose. The first eye-glasses only aided the farsighted. It would take about 250 years or until the middle of the 16th century to develop the curvature in the lens, which aids the nearsighted.

An excellent summary of eye-glass development and invention is here.

Eye-glass discovery and manufacture was tied to science. From the 11th century onwards the puzzle of optics and light had consumed many philosophers and nascent scientists. Grosseteste, Bacon and the Scholastics invented various mathematical theorems trying to explain vision, optics, refractions and reflections. One of the main benefices of medieval science amongst many, was the insistence that light and optics could be explained and used for the benefit of man.

The science of the Scholastics and their predecessors created the intellectual milieu for the creation of eye-glasses and telescopes. These two inventions are intertwined. Spectacles are based on optical science and understanding of 'localized' matter [the eye] using energy and light to discern information and use it. Telescopy was the utilization of lenses to comprehend the cosmos, including energy, light, orbits, moons and planets. Once the eye-glass method was developed, it was only a matter of time before powerful lenses to perform other tasks would be created.

Try creating something as innovative as a pair of glasses....before naming such a period a 'Dark Age'.