Or, Constitutional-Monarchical government, necessary to build the modern world. There are many reasons why England and her British imperial domain, went on to rule the waves and the world. One important factor was the separation of monarchical power, from despotic governance. The idea of a Constitutional monarchy, a division of political and legislative powers, and adherence to a common set of legal norms; was developed only in Medieval England. It began at Runnymede in 1215 with the signing of the Magna Carta [see document here] and was solidified by the now little-known Simon de Montfort [biography] in 1264. Montfort is indeed the originator of the English Parliamentary system.

In the early 13th century King John the despotic English King, presided over a state shorn of financial and economic vitality. John was not only a bad administrator he was a poor warrior. His English realm had already descended into near bankruptcy after it was pillaged to pay the ransom for the Lionheart who had found himself in an Austrian jail. Ruinous wars in France, financed by yet more taxation plunged the economy into tatters. Capital had been deployed from productive private-enterprise to the unproductive public-sector, wasted on wars in France that were poorly fought; and even worse-led.

By 1215 the English Barons were impoverished and sick of John. A nascent revolt forced the English King to sign a limitation on his power, including his right to tax in 1215. The Magna Carta or Great Charter, also created a 'commons body', or an early form of Parliament to manage the King and his finances. John signed the deal and then promptly raised an army to crush the Barons. Thankfully he was defeated. The Great Charter was reissued in 1217 and again in 1225 [history of the Great Charter]. It became the writ of the land and the basis for de Montfort's innovation. 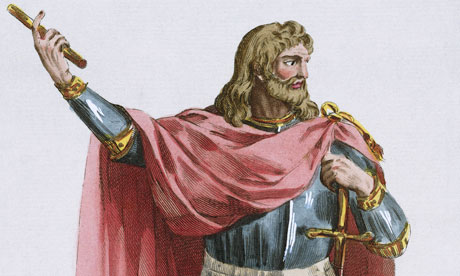 De Montfort was a powerful Baron who became the first English aristocrat to seize power and rule in the name of the King.  Henry of Bolingbroke [link] in the late 14th century would be the second. De Montfort came to view the monarchy and its King Henry III in particular, as unsuited for the governance of a complex and modernizing state. In 1258 De Montfort and other English Barons foisted upon Henry a Constitution, named the 'Provisions of Oxford', which followed from the Great Charter and further eroded monarchical privilege and the ability to raise money and issue laws without the consent of the govern [see here].

Henry, who had gone bankrupt whilst waging wars in France and Sicily for no apparent purpose or identifiable objective, was of course less than pleased with his fetters. The inevitable civil war followed and De Montfort defeated Henry, taking his son captive at the Battle of Lewes in 1264. The Provisions of Oxford clearly identify a Constitutional limit to monarchical power, as well as the establishment of a House of Commons. The basis for future English ascendancy was thus laid.

The propaganda from Marxists and Church-haters is that during the Middle Ages all was dark, black, toothless, wicked, superstitious, dull, illiterate, unscientific, backwards, decayed, crippled and ignorant. Such descriptors might be better applied to the modern age. The Medieval period saw the rise of science, math, agricultural and industrial revolutions, and synthesized philosophy. Trade, invention, methods of power, transport, improved tools, war-making capability, the rise of universities, shipping and vastly elevated living standards, highlight the Middle Ages as an era of change and true progress. Part of this development was the separation of political and legal powers; and the legitimate constraint of monarchical despotism. Without parliament, or a system of political-representation to neuter totalitarianism, the modern world would not exist. The Middle Ages were the only period in history to effect this momentous improvement.