Church destruction is a standard element of Islamic Fascism.

Pull down the structures from real faiths. So demanded Mad Moh and his friend Baal.


Moslem Jihad against Churches. From 637 AD until 800 AD, over 30.000 Christian churches, places of gathering and religious structures were pulled down, demolished or converted to hate-speech centers for the cult of Muhammadan [called Mosques by cult members]. The carnage has not stopped in 1400 years and is on-going today.

Muslims Destroy Church dedicated to the memory of the Armenian Genocide at the hands of the last Islamic Caliphate in 1915, burning the extensive library of manuscripts kept there and exhuming the bones of hundreds of victims interred there. Moslem urinates on a Moslem-destroyed Orthodox church in Serbia.

50 Coptic Churches – minimum – have been pulled down by Moslems in the past 2 years – an example below. Church destroyed by ISIS in Mosul. But remember, ISIS or Islamic State has nothing to do with Islam...... 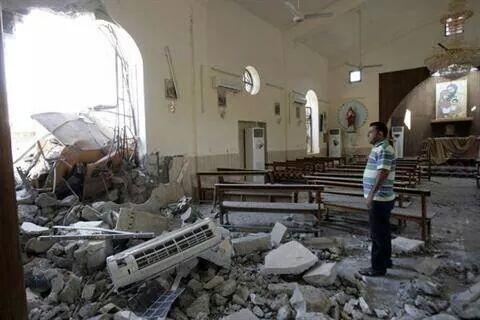