The Rise of Western Christendom, by Peter Brown (and the entry of Islam) 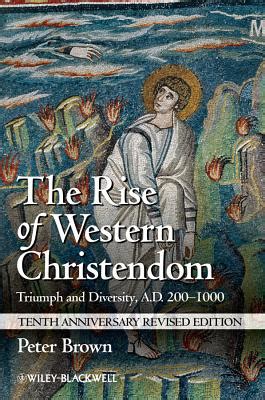 The Christianisation of Europe and large parts of Asia and Africa is accepted as a fait accompli, an inevitability, an unstoppable trend.  As Peter Brown’s very large, comprehensive, and dense book, which is fantastically written, and which illumines the opacity of the late ancient world, clearly presents, this was far from true.  The ‘geographical spread’ of Christianity, to quote Brown, is astonishing in itself.  The cultural adaptation across lands and societies is simply remarkable and an untold tale.  How did it happen?  Why did it happen?

This triumphant diversity and even tolerance of the pagan and non-Christian is an important reason why the religion was able to spread and conquer previous cults and paganisms.  As Brown states, ‘What we now call a distinctively European Christianity was unthinkable in the year 500 A.D.  Even the notion of Europe itself only took on its modern meaning in around the year 650 A.D.  By the year 1000 A.D., what could be called a European Christianity had only recentl been established, with the conversion of Germany, of parts of Eastern Europe, and of Scandinavia.’  Christianity adapted, proved itself morally and socially superior, subsumed and conquered the literally hundreds of existing paganisms.  As Brown relates, every region presents a different story.  Western Christendom has a very distinct history than its brethren in Near Eastern lands, or further afield in Central Asia, and Western China.  How did a small Christian sect, numbering a few score in 35 A.D. manage to organise, coalesce and conquer Europe and huge swathes of Africa and Asia?

Christian ‘Europe’ reaches far back into the past.  It is built on and is infused by millennia of pagan beliefs.  Socio-religious narratives, the immaterial, discussions over the soul, purgatory and hell, have deep antecedents in pagan culture and philosophy.  Cultural mores and beliefs would have greatly impacted all Christian practices and beliefs.  Christianity cannot be neatly divorced or disconnected from the age-old beliefs and certainties of the societies it entered, comingled with and eventually dominated.  This is why Christianity can look quite different depending on what region or area one investigates.

As Brown states, ‘the warring Christian churches of Asia and Africa turned the Middle East into a vast echo chamber, resounding with lively conversations.  The literature of every church was characterised by debates with real or imagine rivals….it was the cyber highway of the age….The men who contributed…cared deeply about education.  Based in the city of Nisibis…Nestorian Christians…created an entire new system of Christian schooling…They also cared about the Greco-Roman past.’  Plato is clearly found within St. Augustine and neo-Platonic discussions on the soul and the immaterial world beyond the living.  Aristotle infused naturalism and Scholasticism.  Roman literature was analysed and discussed.  There was a continuity within the Mediterranean world from 200 A.D. to 1000 A.D in which Christian ideals were blended with Greco-Roman.  Civilisation continued and was improved.

Then when we the entry of Islam.  As Brown writes:  ‘The roots of Islam lay in an Arabian peninsula that was by no means a bleak and isolated desert.  The Hijaz, in which…Muhammad received his message, was part of great echo chamber of religious ideas that had developed throughout the Middle East in the late sixth and early seventh centuries.  We have also realised the zet with which the earl Muslims appropriated and adapted the artistic and technical skills of the regions which they conquered.’

If one reads the Koran, you will see that it is a purloined, and incorrect appropriation of Jewish and Christian canonical texts.  It is also quite pagan, given that the Al Lah of Mecca is Baal who is a moon deity, a common cult in the Near East.  What Muhamamd did was combine the aspects of miraculous and divinely sanctioned mono-theism with existing Meccan Al Lah worship.  The ‘echo chambers’ of articulated and emotional Christian argumentation would have been carried along the trade routes from the Levant to Christian communities in Arabia.  Muhammad was a caravan owner and would have encountered these lively debates and ideas.

As Brown recounts, the Muslims defined themselves in opposition to the Christians.  This led to two ideals within Islam.  The first was related to the ascetic, retired Monk, who denied the world and devoted himself (or herself in the case of Nuns), to God.  There are no communities of Nuns or Monks in Islam.  The second was more prominent and important, namely the ethos of the warrior Jihadi and soldier for Muhammad and the Al Lah of Mecca.

“The Muslim idealisation of death on the battlefield…arrived at through a conscious wish on the part of Muslims to define themselves against non-Muslims – especially against Christians…..What they found was a hard doctrine.  The notion of Jihad repelled Jews and Christians.  Ever since, it has played a major role in the negative image of Islam.”

Jihad was the Muslim ethos of choice.  It was not just to ‘oppose’ Christian monasticism and ideological ferment, which is what Brown offers.  Jihad was practical.  Muhammad needed men to conquer, and the allure of booty, women, and land was paramount.  Muhammad was no prophet, but an empire builder.  Monotheism and the vanquishing of all pagan idols bar the Al Lah or moon deity was paramount for unification of diverse tribes and clans.  The Christian and Jewish communities in Arabia and beyond were wealthy and advanced in comparison to the penury of most Arab pagans.  The 7th century Jihad against Christianity in Arabia and beyond by the cult of Muhammad, has parallels with the Viking onslaughts against Britain and northern France in the 9th century.  Riches, an advanced and prosperous civilisation, sex slavery and pillage were the inspirational objectives of the Al Lah cult and Muhammad.  You need to pay brigands, gangs and mercenaries.  The spoils of war (to quote a Koranic chapter heading) is how you accomplish this.  The theological foundation of Muhammadanism was war and subservience to Al Lah and Muhammad.