Sura 9 is a clear example of hate speech - so where are the Human Rights Commissions?

I am deeply hurt by Koranic fascism and intolerance.....

This Sura disproves, as does every Sura, the myth that Islam is love and harmony. Sura 9 which is one of the last two 'revelations' given to the 'great man' Muhammad [Obama was of course not yet 'uncreated' in 571 AD...], and which trumps the earlier Sura [the Moslem law of abrogation]; has nothing nice to say about the Infidel ape and swine. Nothing. Sura 9 is simply a repetitious expression of the 4 main ideas of the Koran [written previously here]:

“To be exact of the 129 verses in this Sura, 119 are concerned with the 4 main themes of the Koran – obey Allah, follow his Messenger, hate the Jews, and fight and conquer unbelievers – including disbelieving Arabs [the first such mention of non-believing Bedouins]. The other 10 or so verses deal with charity [Zakat or charity is a tax sent to the centralizing power of the Umma, and it can be used for anything including Jihad], breaking contracts with pagans and repenting to Allah – no Golden Rule here of course.”

Being an obscene non-worshipper of the moon deity and of Muhammd – Allah and Muhammad are the same in the Koran and in practice – and having nothing else to do to keep my febrile witless mind busy, I decided to count up the number of verses within Sura 9, which directly demand violence against the Kufar pig. Here is what the lay reader will find. Out of 129 verses in this Sura named 'Repentance' fully 32 preach violence against the Infidel. 32 is 24.8% or ¼ of the Sura is a demand that Moslems attack and subdue the Infidel as an obligation to Allah/Muhammad. If we expanded the definition of violence to include indirect precis' and threats, the percentage of hate speech rises to 40%, in Sura 9. Such a number is deemed 'moderate' by self-hating Western Marxists and one-world-wonders. But an obvious question is this: since when does a 'religion' call for the eradication of those who are outside of the cult? 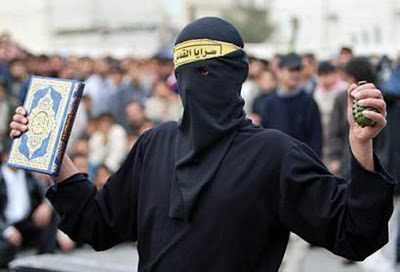 Some of the more obvious and direct phrases of inducement to violence against the criminal non-Moslem include:

14: Fight against them so that Allah will punish them by your hands and disgrace them and give you victory over them and heal the breasts of a believing people,

29: Fight against those who (1) believe not in Allah, (2) nor in the Last Day, (3) nor forbid that which has been forbidden by Allah and His Messenger (4) and those who acknowledge not the religion of truth (i.e. Islam) among the people of the Scripture (Jews and Christians), until they pay the Jizyah with willing submission, and feel themselves subdued.

39: If you march not forth, He will punish you with a painful torment and will replace you by another people, and you cannot harm Him at all, and Allah is Able to do all things.

44:Those who believe in Allah and the Last Day would not ask your leave to be exempted from fighting with their properties and their lives, and Allah is the All-Knower of Al-Muttaqun (the pious - see V.2:2).

63: Know they not that whoever opposes and shows hostility to Allah and His Messenger (SAW), certainly for him will be the Fire of Hell to abide therein. That is extreme disgrace.

101: And among the bedouins round about you, some are hypocrites, and so are some among the people of Al-Madinah, they exaggerate and persist in hypocrisy, you (O Muhammad SAW) know them not, We know them. We shall punish them twice, and thereafter they shall be brought back to a great (horrible) torment.

And on it goes. There is not one single sentence fragment which discusses ethics, spirituality, free-will, a respect for human life....nothing. It is a screed demanding war, Jihad, submission to the Muhammad idol, and a justification for the 'Allah tax' or Zakat, wrongly conflated by the large brains in the West with charity when it is simply a financial tool to keep the Umma strong and the expansion of the cult an on-going concern.

Sura 9 is either the first or second most important chapter in the Koran. Its call to supremacism, hate, Jihad and expansion must have an effect on Islamic and Moslem culture. How can Moslems read from this Sura and miss the irrational, free-will denying intent of this declamation? Further why are such ideas now termed 'religious'?